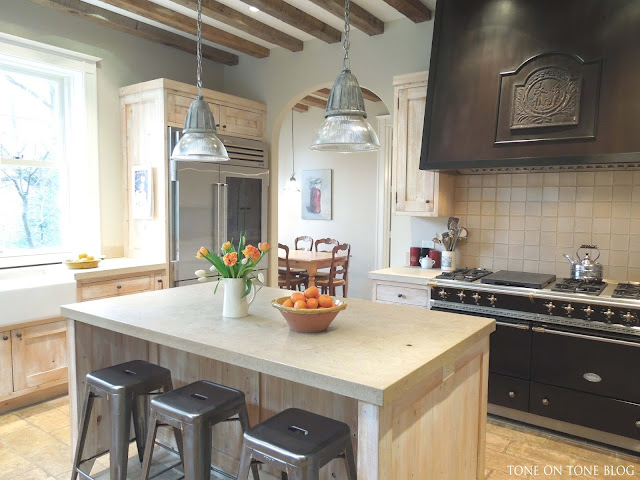 Can a kitchen be beautiful yet practical? Sophisticated yet approachable? Neutral yet warm? Read on!

Over the past few years, I've featured various house tours. One of my favorites and yours, according to the many pins from Pinterest, is Tracey's kitchen; you'll remember it shown here in 2012.

Tracey, my dear friend and client, gutted the dated 1980s kitchen in her historic Mediterranean-style home as part of a major house renovation. She and her husband worked with Muse Architects on the project. In designing the new kitchen, Tracey looked to France for inspiration, and sourced many reclaimed items for character and patina. Above all, she designed it to be functional and practical for her family of five plus two doggies.

Let's revisit this kitchen to find out how it's held up, and check out what's new amongst the old. Let's also peek into some of the adjoining rooms. 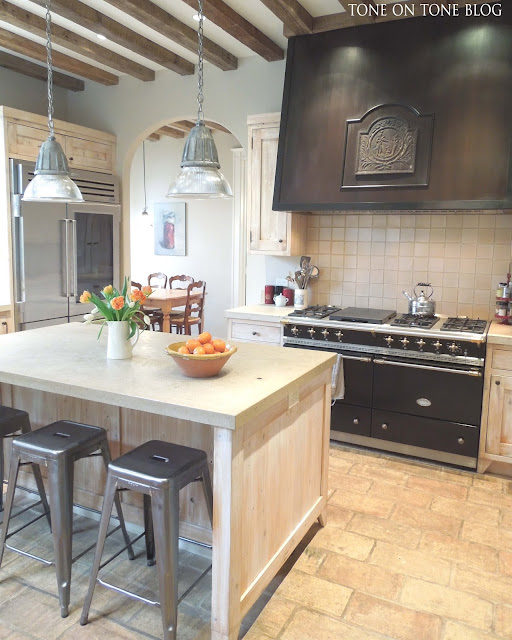 Back in 2012, the space above the Lacanche range was plain drywall. Look at the charming tiles from Ken Mason Tiles now! They are handmade terra-cotta tiles with sought-after imperfections in the glaze pigments and profile. Tracey wanted something subtle to complement the warm limestone countertops as well as the soulful terra-cotta floor tiles reclaimed from France.

The simple tiles also do not compete with the stunning steel hood accented with an usually small fireback from the 19th century. During the 18th - 19th centuries, iron firebacks were commonly placed in the backs of fireplaces to reflect and radiate heat into rooms - effective even after the fires have died down. 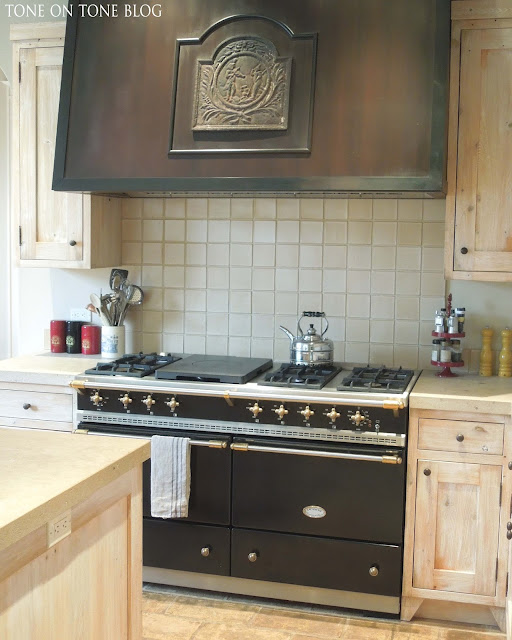 The pair of Ca. 1940s factory lights are from my shop; I brought those back from France. Together with the steel hood and French Tolix stools, these pieces give the kitchen a casual, industrial vibe that's unexpected with the luxurious Lacanche range. 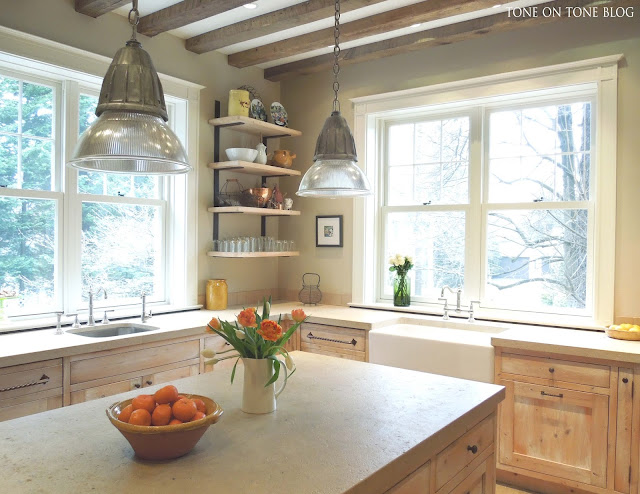 The 2" thick Massangis Jaune Clair limestone countertops have held up very well; they've taken on a mellow patina. I asked about stains, watermarks and scratches, and Tracey told me none of those have been issues. Her family does not use coasters, by the way. The countertops are sealed when needed. Plus, any mark would only enhance the character of the limestone with its natural veining and specks of fossils.

This kitchen is not just for show, it serves an active household that really cooks. There is anywhere from five - fourteen for dinner every Sunday night. With open shelving, two sinks and nothing precious, this is a family-friendly kitchen.
Here are two of the youngest members of the household: Peter and puppy Oscar!     ﻿ 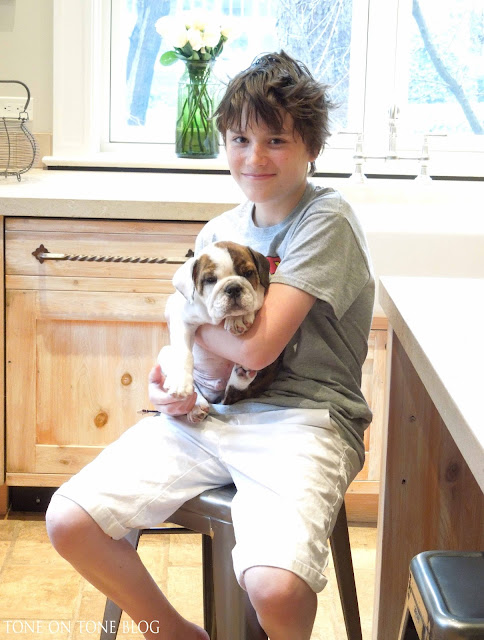 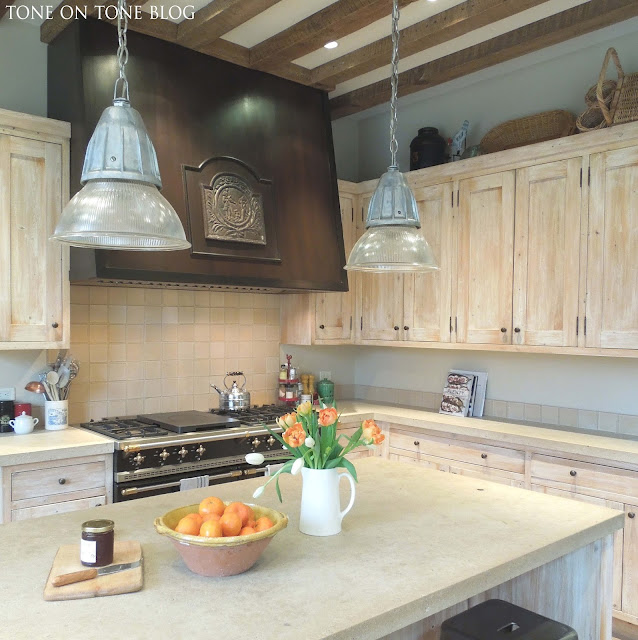 BELOW: Tracey sitting in the adjoining breakfast room with a wall of pantry cupboards made of the same cypress wood as the kitchen cabinets. Notice the stepback sides, which is a clever way to break up the horizontal expanse. Check out the 11' ceiling.

Speaking of ceiling, old pine beams reclaimed from Vermont were installed. In addition to being beautiful, they bring texture and coziness to the soaring ceilings; also a feeling of old to the renovated spaces. 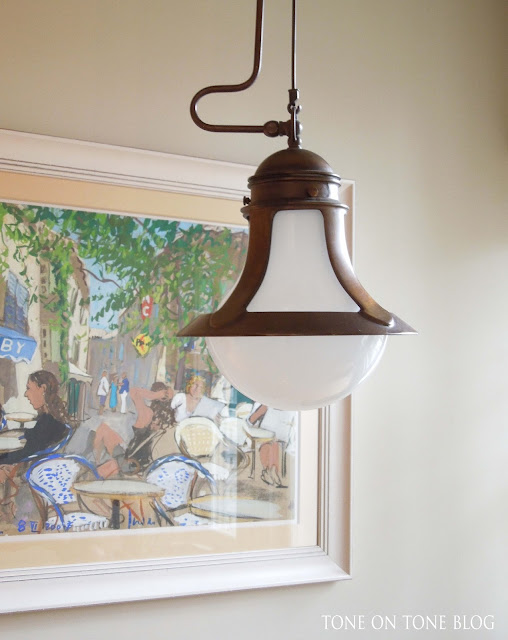 Light fixtures from Aldo Bernardi were imported from Italy. Aren't these sculptural? 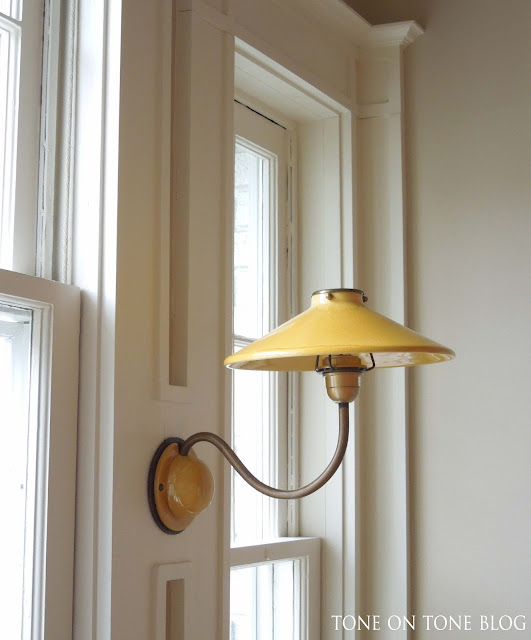 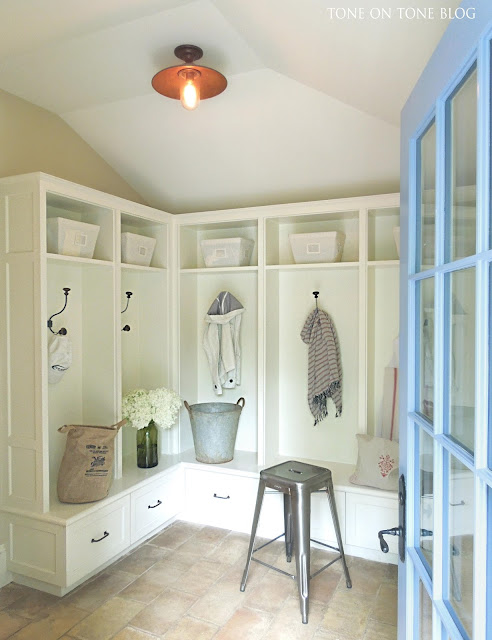 Behind the kitchen is the renovated mudroom with the same antique terra-cotta flooring. It's ochre-beige tone warms up the crisp cabinetry, as well as being very forgiving - it shows very little dirt. This is a small room that feels more spacious thanks to the light palette. For storage, there are airy, open niches and cubbies on two sides of a built-in; the third side features closets for seasonal coats. Notice the glass door which maximizes natural light. 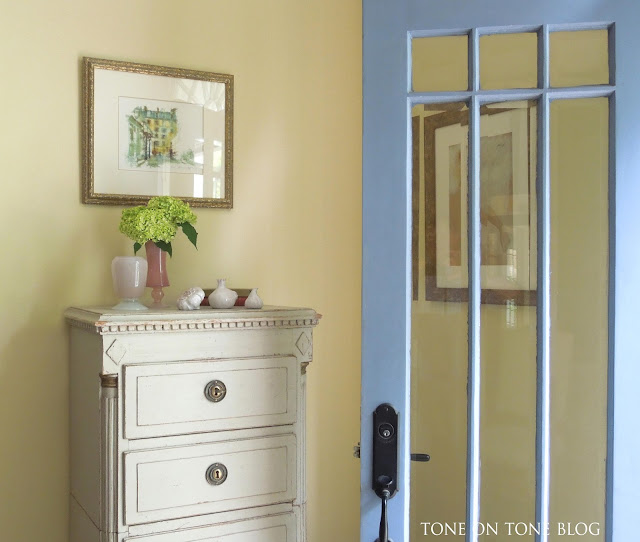 The final space off the kitchen is a long hall leading to the stately foyer with a floating staircase. There are French doors painted in the same (custom) blue color as the mudroom door.
Tracey made this grand space less formal by furnishing it casually. Flanking the front doors is a pair of 19th-century Swedish painted chests from Tone on Tone. Also from my shop is this 18th-century Swedish daybed from the Gustavian Period. The staircase runner is wool, and the area rug is sisal with a diamond pattern. 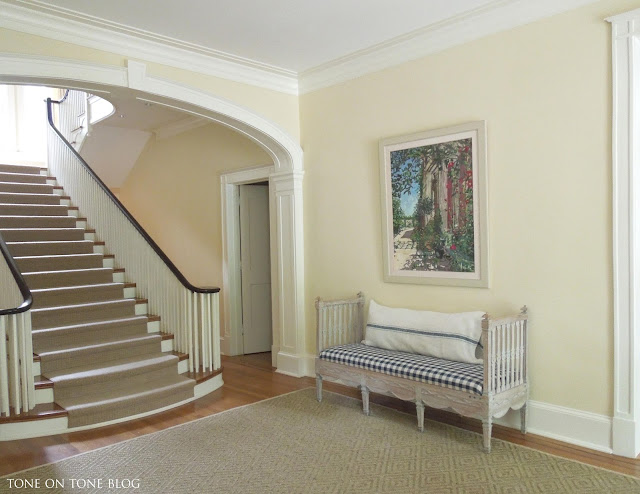 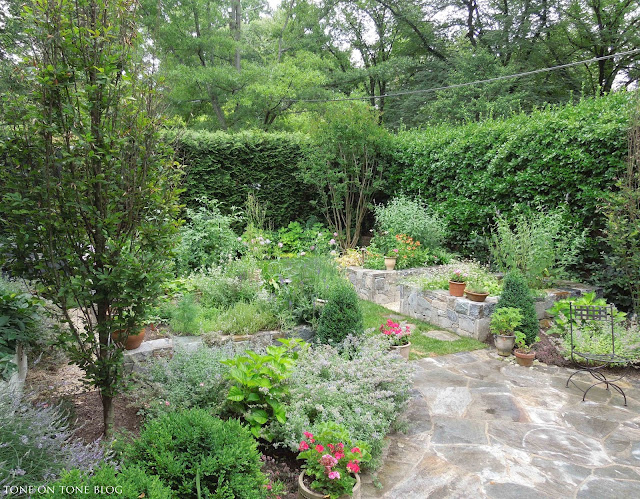 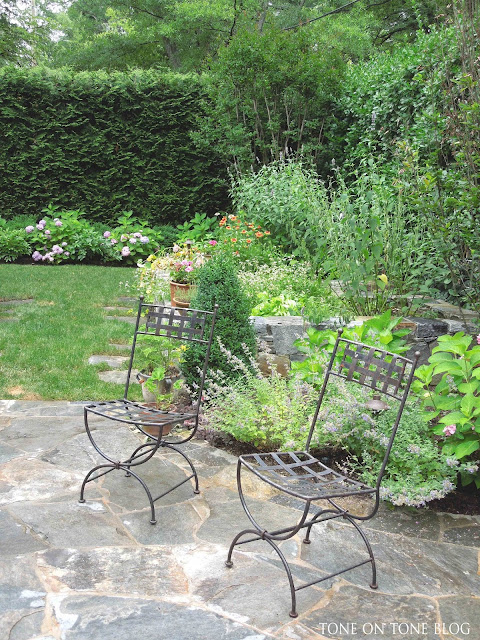 And above are peeks of the new potager garden with raised beds for herbs and veggies.

Many, many thanks to Tracey and her family for allowing me to share their special home once again!

Until next time -
Cheers,
Loi

Many thanks for your visit! If you have a question, please leave a comment and I will do my best to answer. Loi