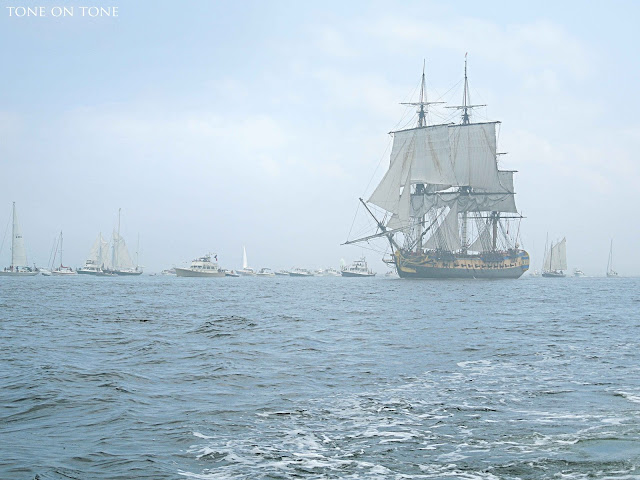 It was an overcast, cool morning in Castine; typical Maine weather. But this was no typical morning at all. There was a buzz brewing beneath the calm throughout our seaside town. Welcome banners and festive flags lined the streets, punctuating this gray morning with pops of color. And down at the dock - which had been strung with brilliant lights - tents of all sizes were popping up everywhere. Something big was coming!

Our historic town was preparing for the arrival of l'Hermione - a replica ship of General Lafayette's 18th-century frigate that aided the Americans against the British in the Revolutionary War. Like the first Hermione, this one had sailed from France to America, and she was coming to Castine just as the 18th-century ship had done. Actually, Castine would be her last port of call in the U.S. - a 'grand tour finale' after stops in Alexandria, Baltimore, New York, Boston, etc.

Adding to the excitement, it was Bastille Day, France's national holiday celebrating independence. Castine was occupied by France more than once, and is named after French Baron Jean-Vincent de St. Castin.

To welcome the Hermione, a parade of ships would escort her into the harbor. Tom and I, along with our friends, Bill and Rosie decided to partake in this meet-and-greet at sea. We ventured out with about 100 other boats. Here's our little adventure. Click on photos to enlarge. 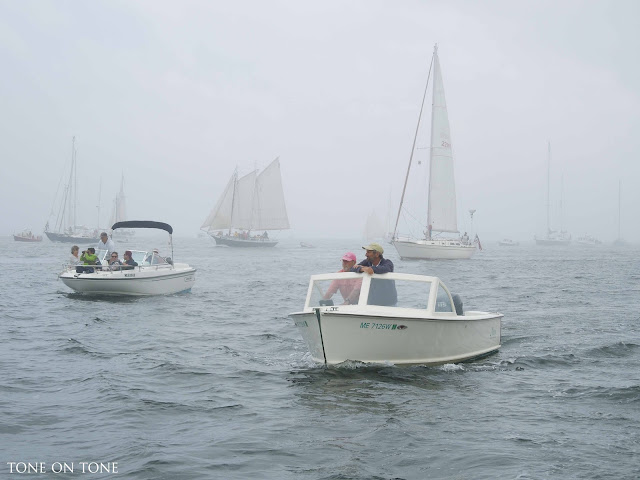 Leaving the dock, we noticed boats, ships and vessels of all kinds headed out to the rendezvous point. We also noticed the weather turning dramatically. Dense fog quickly engulfed everything in sight; one by one, vessels disappeared... We found ourselves alone and, quite honestly, a bit disoriented. Then signals from foghorns started flaring from every direction, creating more confusion. Occasionally something big would creep into and out of visibility, and we would wonder..... 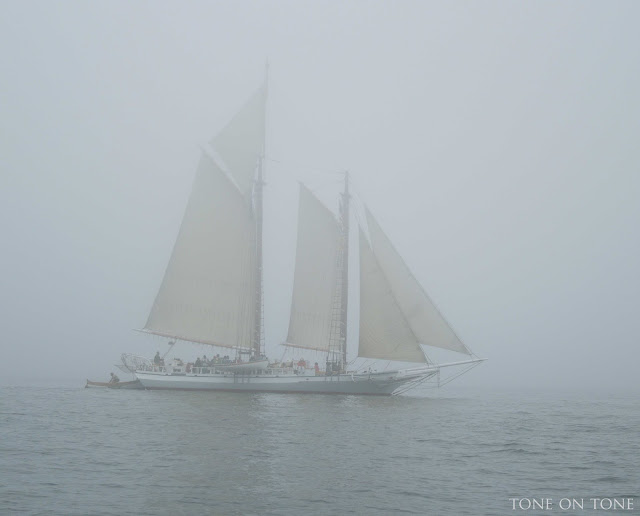 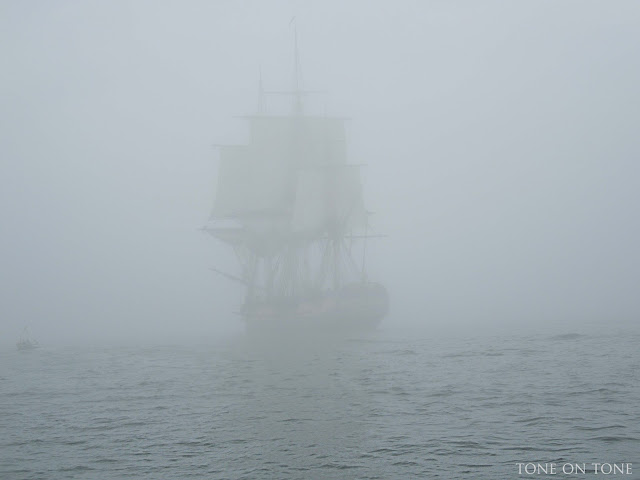 Wait, something HUGE with a very loud foghorn was in the distance. Other vessels started approaching. Finally, there she was under sail: L'Hermione!! 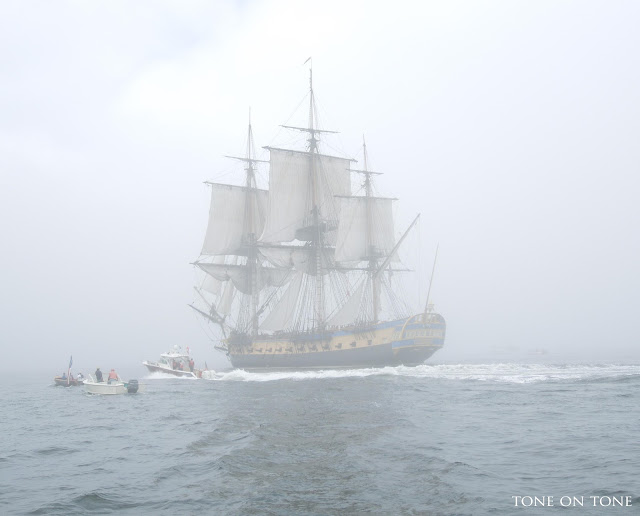 The fog started lifting, but not knowing what would happen weather-wise, we headed home. I turned around to this sight (below) of the Hermione leading the fleet - pretty unforgettable! 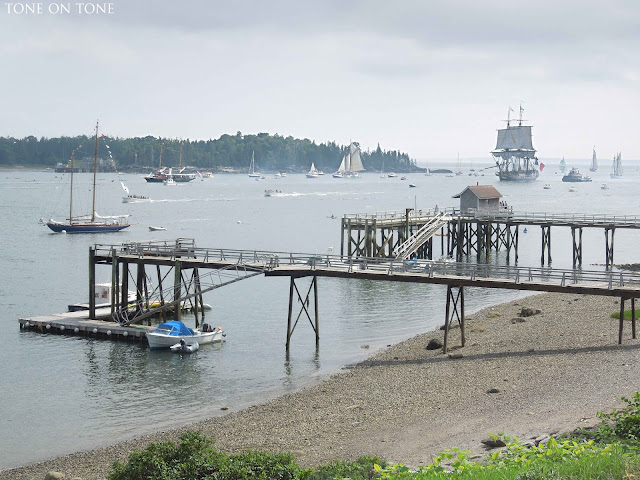 We made it back just in time to catch the Hermine sailing into Castine Harbor. Thank you, Kevin and Roxanne - that was awesome watching the arriving flotilla from your place! 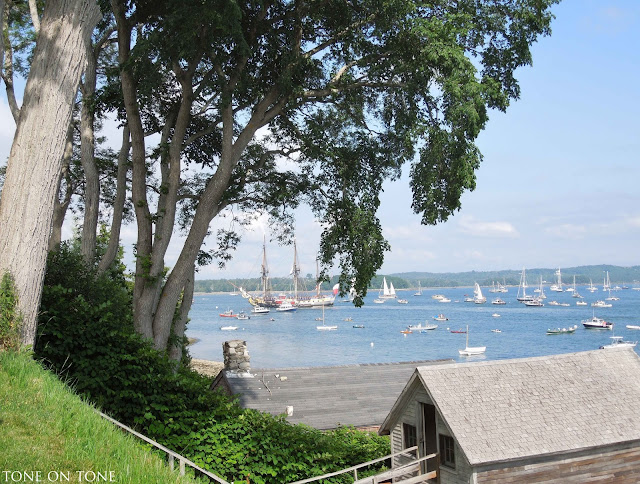 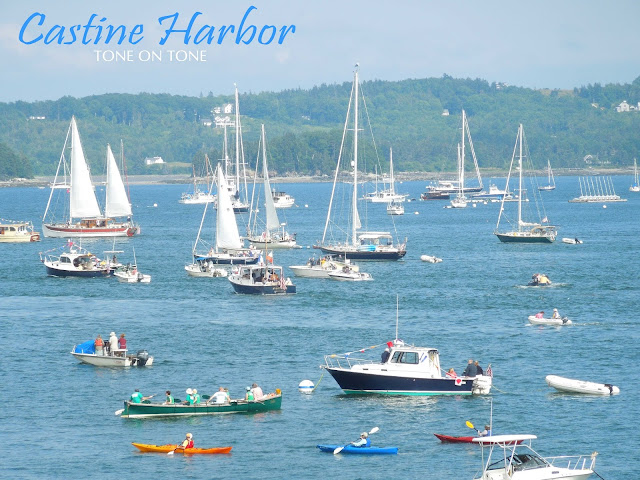 And look what we have: blue sky and sunshine. The harbor glistened with sailboats, powerboats, rowboats, kayaks, dinghies, etc. 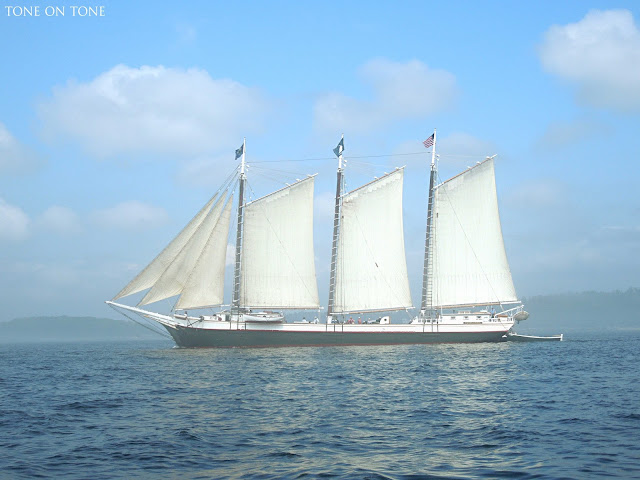 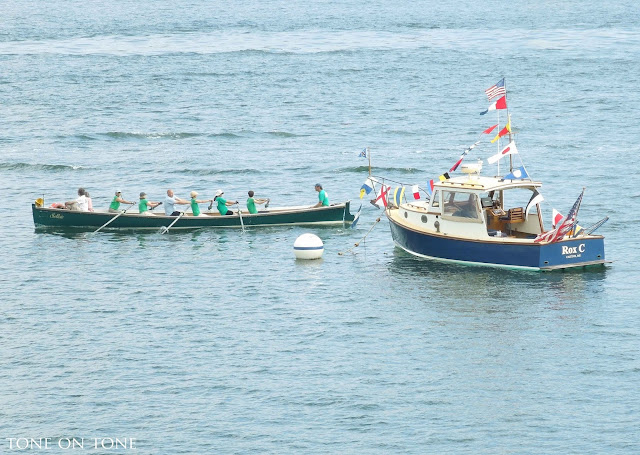 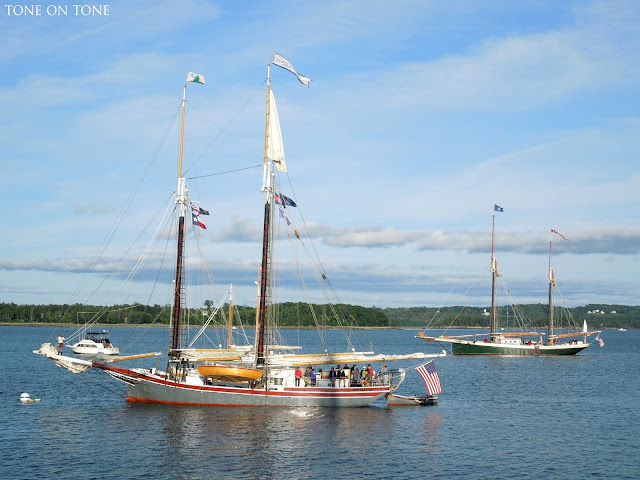 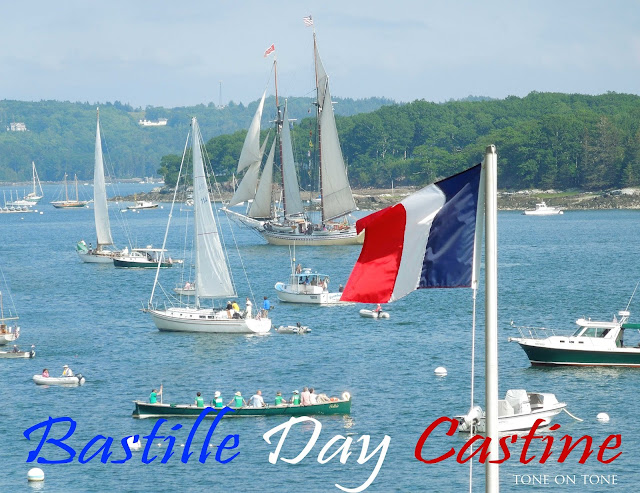 Castine had the distinguished honor of hosting l'Hermione on Bastille Day. Thousands came to join in the festivities. I chatted with a French Canadian from Quebec, and learned the following:

From the moment that I heard the name of America, I loved her. From the moment I learned of her struggles for liberty, I was inflamed with the desire to shed my blood for her!
~ General Lafayette 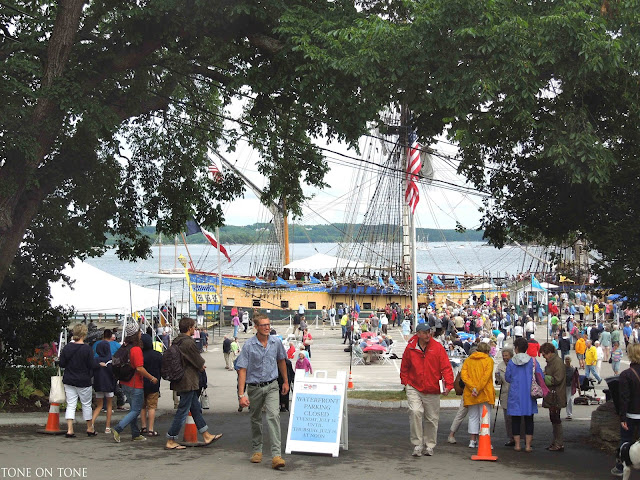 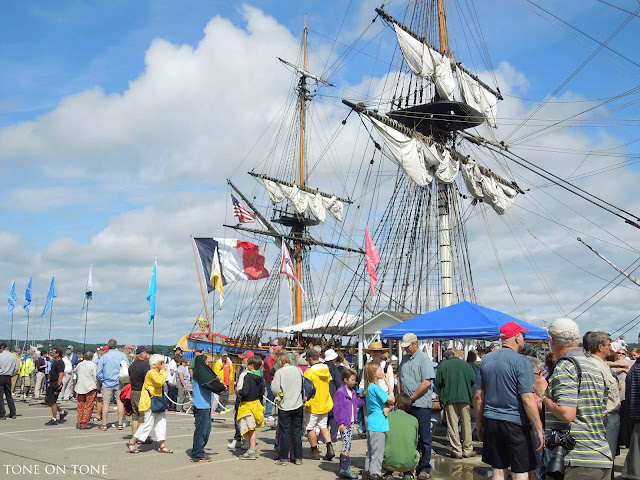 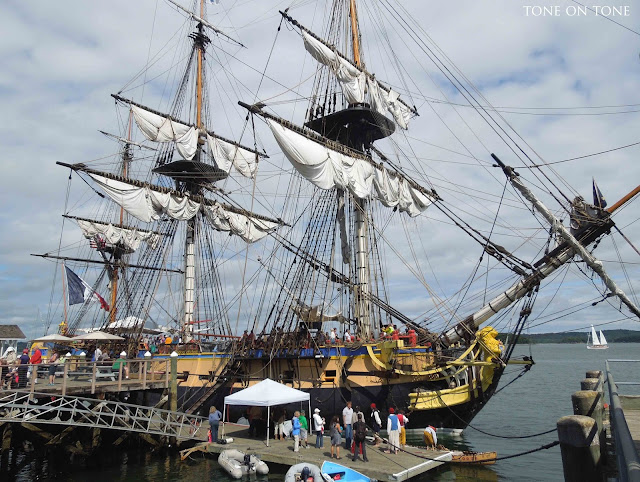 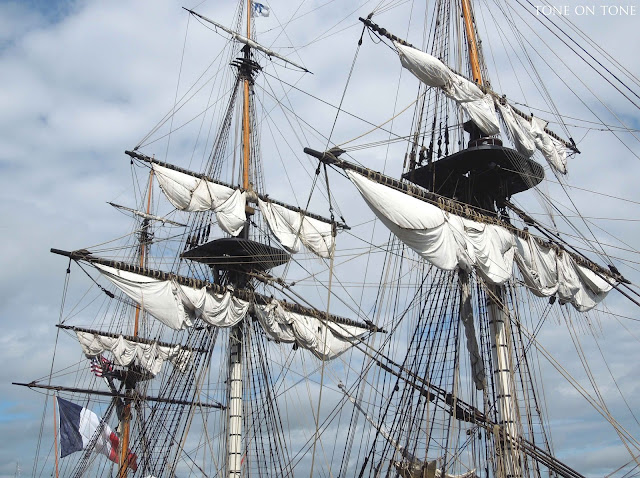 I mistakenly called those ropes, and was swiftly corrected. Those are lines! 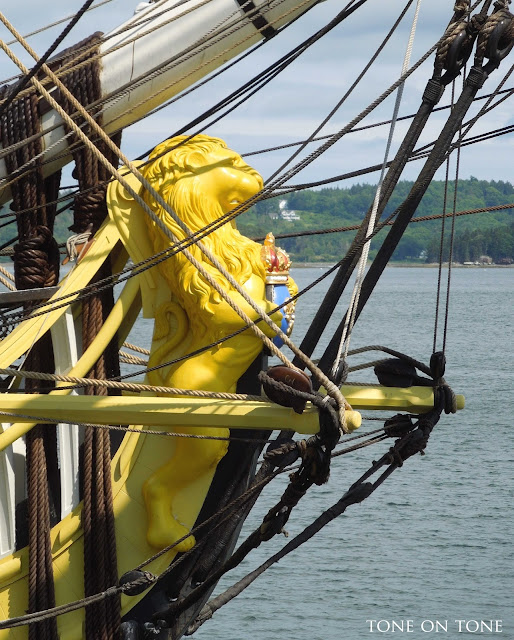 ABOVE: The hand carved lion figurehead at the beak of the bow.
BELOW: The stern with a bay of cabin windows. Note the "Betsy Ross" flag featuring the thirteen colonies, which would have been flown during the American Revolution. 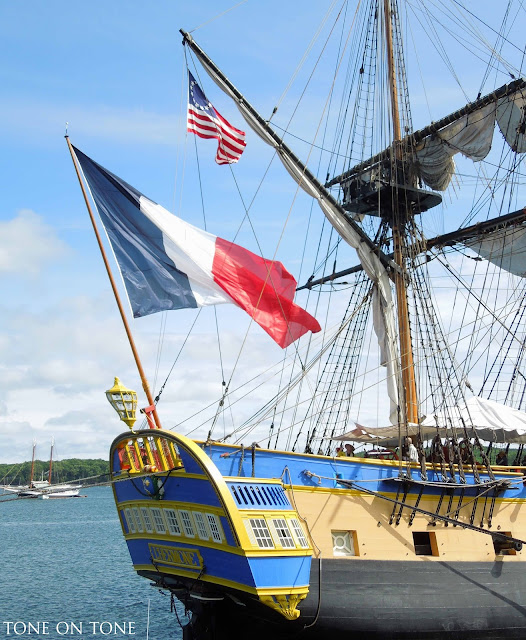 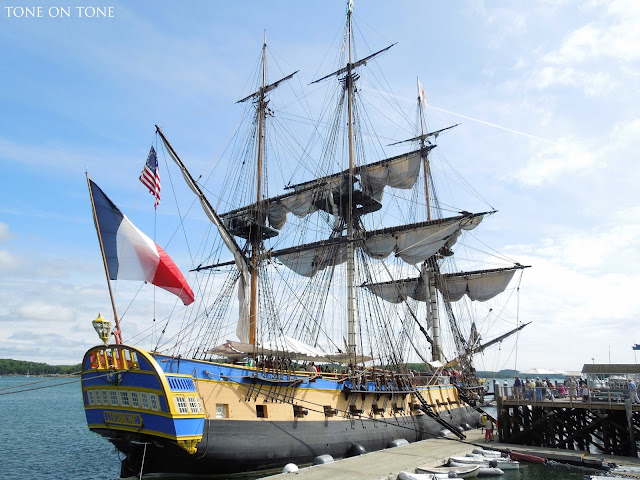 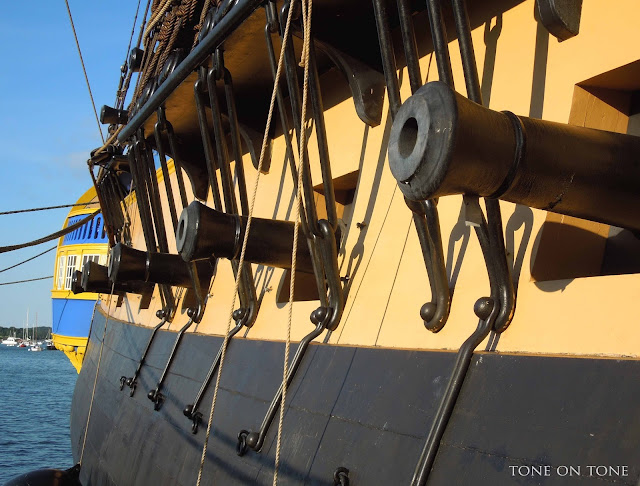 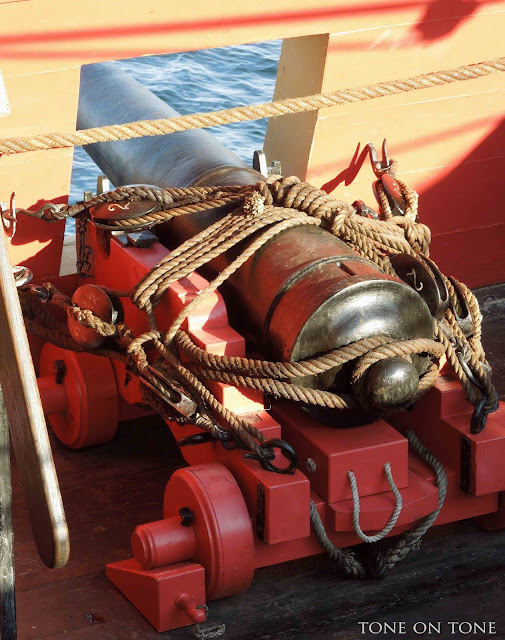 Tom and I had the opportunity to tour l'Hermione, which was an incredible experience. The sheer number of lines was dizzying. The masts towered over everything. And those cannons! 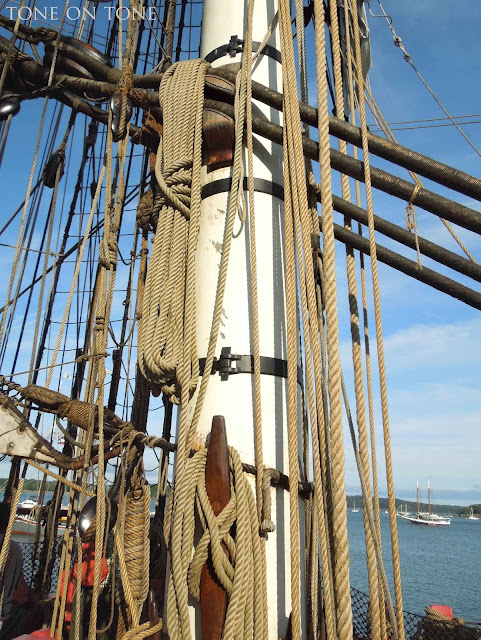 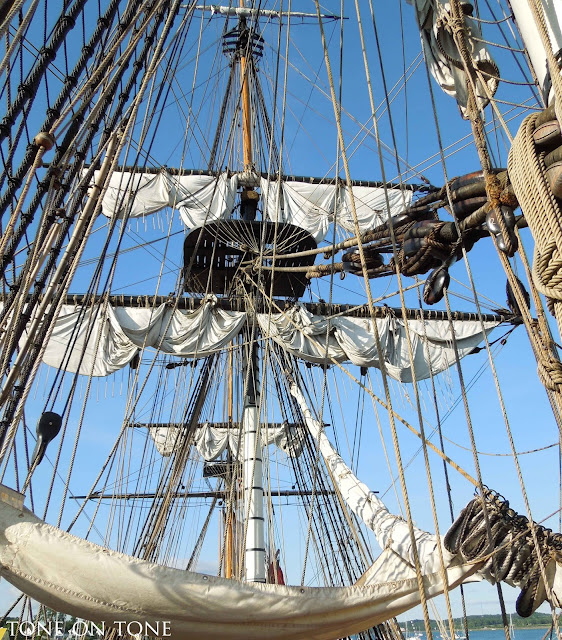 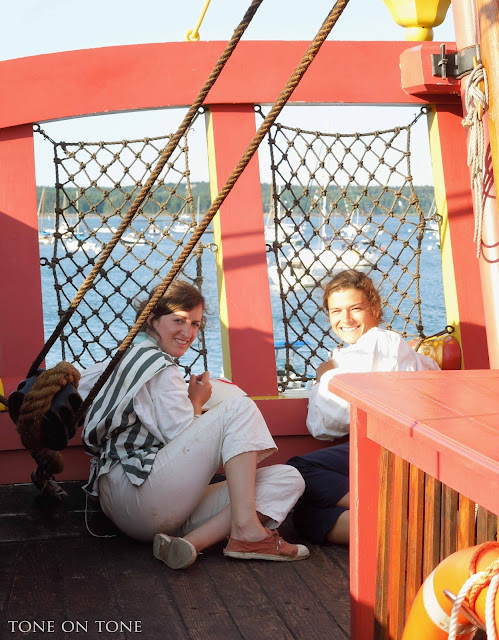 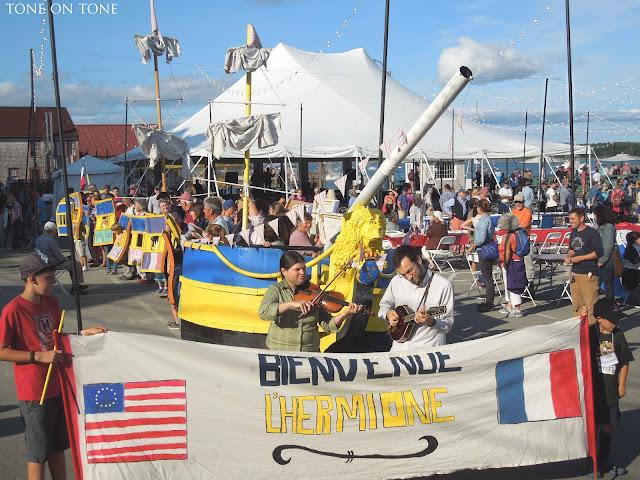 Check out this papier-mache replica of the replica. With the guidance of artist and gallery owner, Goody-B Wiseman, children and adults created this impressive model that greeted the Hermione. 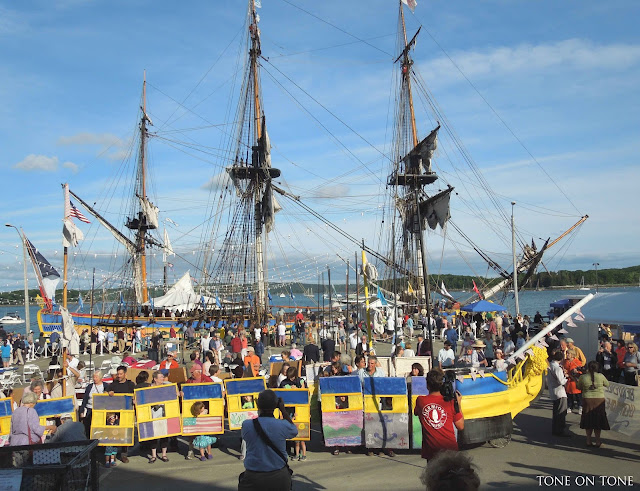 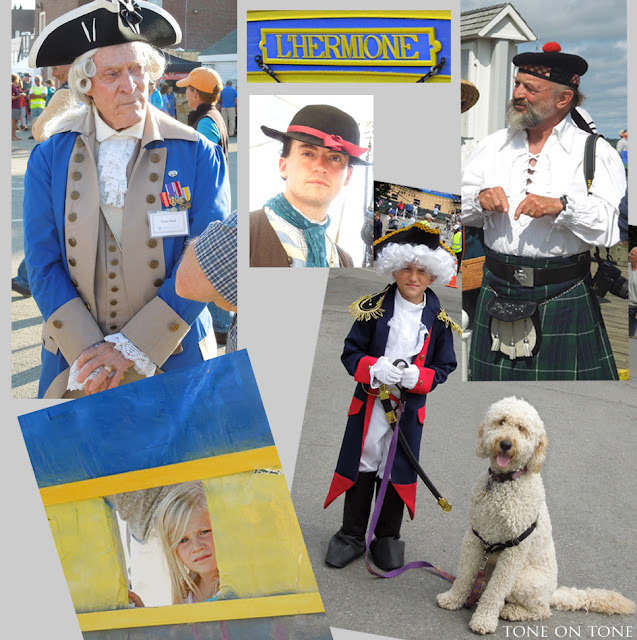 A festive gathering of characters, personalities and pooches of all sizes :)

Many thanks to the organizers, supporters, volunteers, and all who made this historic event such a huge success. A very special thanks to the Castine Historical Society! Castine truly is a special place with an overwhelming sense of community.

Many thanks for your visit! If you have a question, please leave a comment and I will do my best to answer. Loi